When the Worst Things Turn Out To Be The BEST Things

The other day I wrote a post about how two of my most financially successful friends and clients deal with adversity.

And that got me thinking about something strange that happened…

Now, to anyone who’s never fully given themselves to an exercise regimen, or been obsessive about hitting their goals, part of what I’m about to say might sound silly.

​And hey, maybe making a big deal out of what happened IS silly...

But I was PISSED.

And shoulder injuries have plagued me since the beginning. I'm talking since week one. 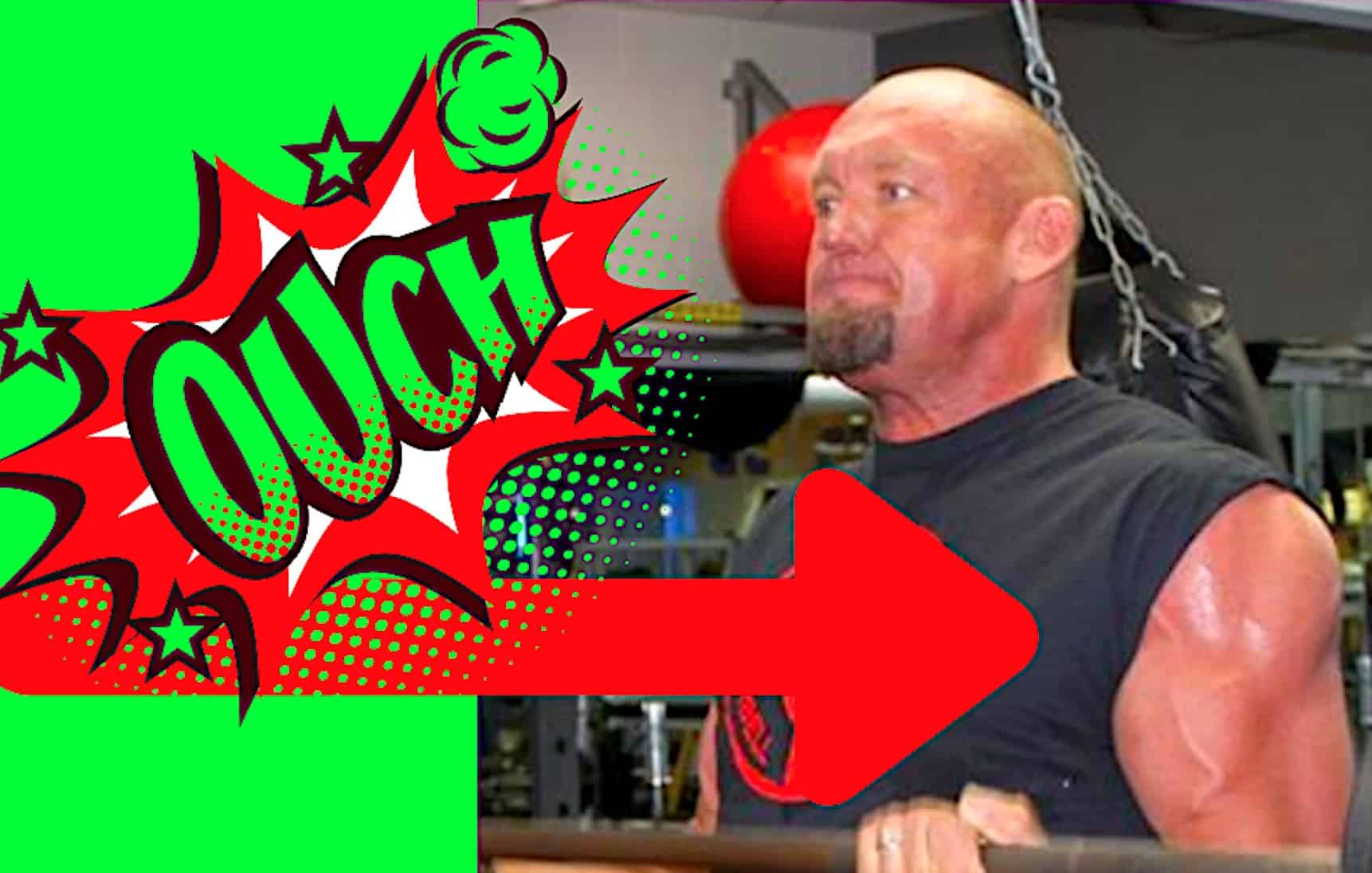 Sometimes it got bad, but usually the pain was bearable. Something to work around.

In 2002, after foolishly pre-exhausting my rotator cuff muscles with external rotations before a semi-heavy set of bench press, I felt and heard tearing in my shoulders as I lowered the bar to perform my first rep.

Both ​of 'em blew. Totally shot. Especially the left…

For a week my left shoulder was an inch-and-a-half higher than my right.

It hurt like hell just to put a shirt on, towel off when getting out of the shower, or reach for something.

For a month I had to forgo all upper-body pressing movements. The pain was too great and I could feel the motions further damaging the shoulders.

A year later they were still giving me grief.

I feared surgery was the only solution.

I’d heard a lot of great things about Active Release Techniques (ART) and found a practitioner. Twice a week he smashed the muscles around my scapulae with his rigid thumbs as I moved my arm this way and that.

The pain was glorious.

It was amazing. No more clicking, popping or nerve pain radiating from rhomboid to thumb.

I knew re-injury was never far off, but managed to avoid it.

By 2010, along with my business, my build and how much I could lift topped my list of priorities.

I spent a lot money on food, nutrition coaching, supplements, and anabolics. I scheduled my life around my training.

I liked the identity of being a big, buff motherfucker. 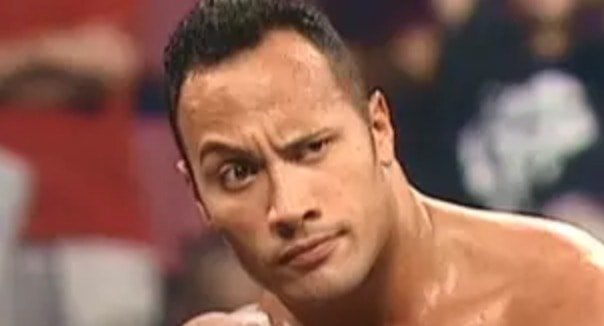 ​As I’d tried with money and recognition, I thought I could fill at least some of that gaping hole of ​inadequacy inside me with lean tissue.

I was lifting weights heavier than I ever had and was bigger and leaner than I’d ever been (I’m 6’6” and was a LEAN 265lbs at the time).

And my shoulders were strong, pain-free, and felt healthy.

I was going to get HUGE!

I'll see ya in the ring Dwayne Johnson!

One morning, as Five Finger Death Punch kicked my ass through the earbuds with a thunderous firestorm of heavy metal awesomeness...

...I rolled back onto a bench with a pair of fat dumbbells to bust out a set of flat dumbbell presses.

Before I could explode out of the hole, a scorching ice pick stabbed me in the left shoulder.

I dropped the weights, sat up, and grabbed the shoulder.

I was so mad at myself. The injury could’ve been avoided had I not gone so heavy on an exercise I knew put my shoulders at risk

I know this sounds weird…

And people who’ve never had a taste of bigorexia or been obsessed with lifting or fitness goals may not understand this, but part of me was devastated.

No doubt the gains for my upper body pressing structure would not only screech to grinding halt, but I’d just jammed the gearshift into reverse.

I hoped that by some bit of good luck, I’d wake up in a few days and it would be fine.

And I no longer lived in the area of the ART guy who’d put me back together before.

After a super-light upper body workout that did nothing but depress me,
I spotted a new Massage Envy near the gym. I’d never seen it before.

I told the receptionist to hook my up with whoever there was best as steamrolling the living shit out of people.

“I’ve got just the therapist for you,” the girl replied. She tapped her keyboard and eyed the monitor. “And you’re lucky. She had a couple cancellations and has openings at 4 and 5 today. One of those work for you?”

I returned at 4 for a two-hour session with the therapist. Her name was Veronica. 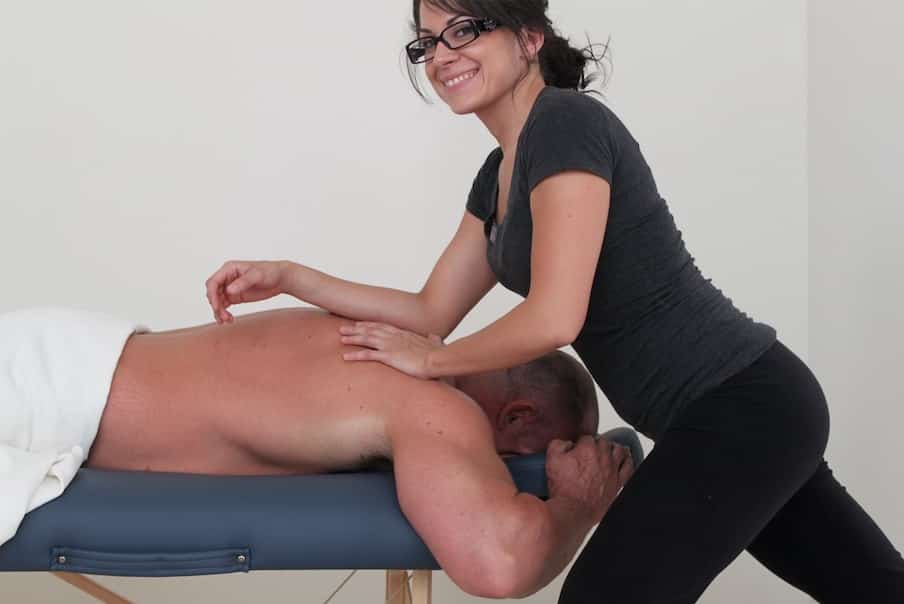 ​Not only was Veronica the best message therapist who’d ever worked on me, but today she’s my wonderful wife and the mother of the three monkeys ​playing in the other room l as I write this.

Had I not mangled my rotator cuff, I never would've walked into the Massage Envy have met Veronica. Or had two a hours a week to get to know her, as she dug her dagger-like elbows into my warn-town muscles. 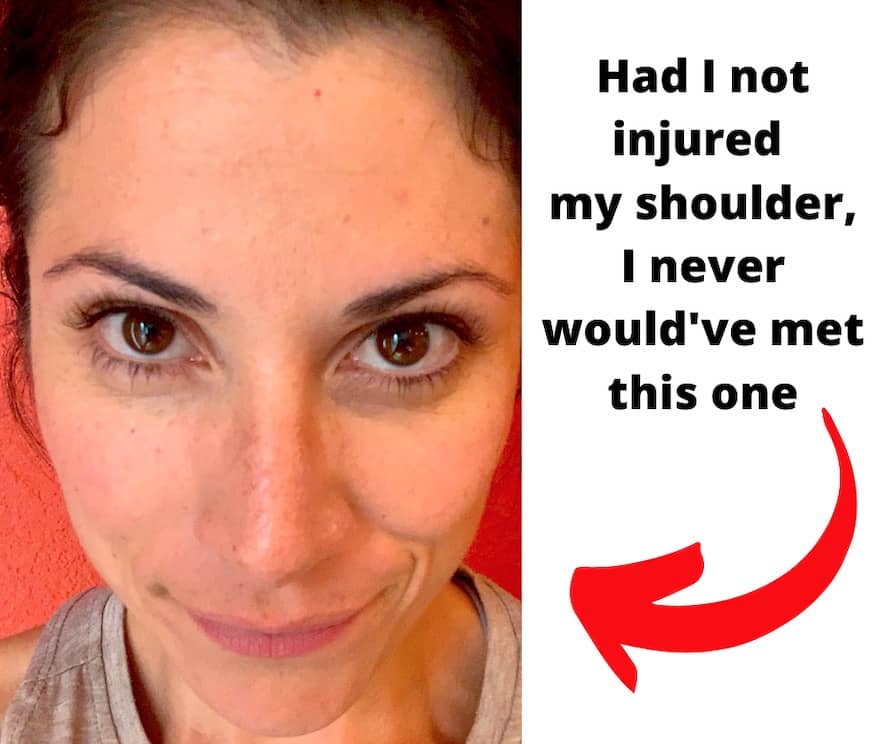 In fact, had not every second and inch of my life happened exactly as if has—the addictions, homelessness, incarcerations, and hundreds—thousands—of miscalculations—I wouldn’t have my children, Zoe, Seersha, and Bronson.

I may have three other children—with the same names even—but it wouldn’t be these little monkeys... 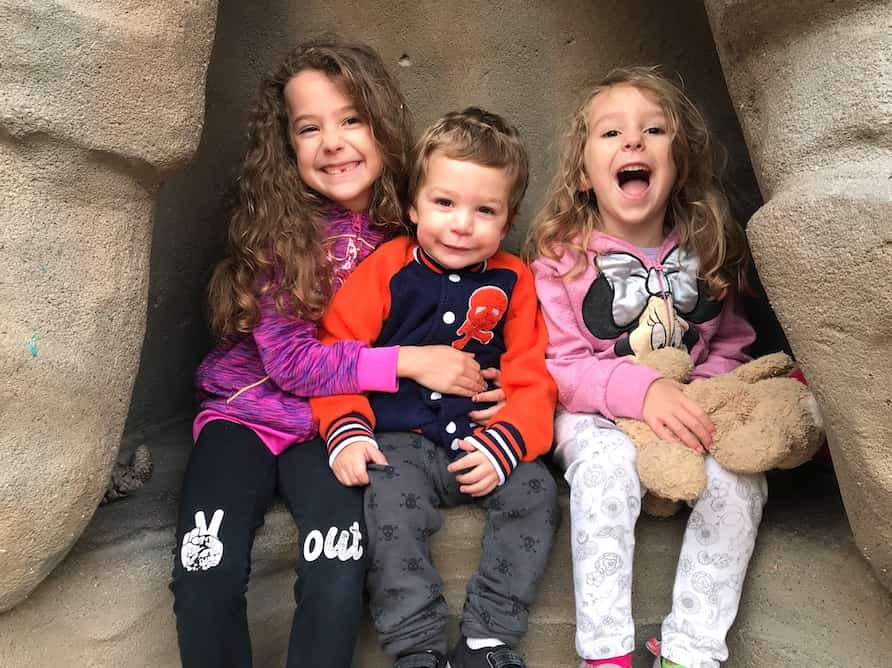 Everything in my life had to line up exactly as it has for my children to be my children.

When I was irked at myself for re-injuring my shoulder and bumming on how it screwed my whole program up, I never would’ve guessed it was a necessary for me to receive most incredible gifts of my life—my wife and children.

I can look at things far worse than a shoulder boo-boo in the same light. See the same patterns.

Like, say, my obsessive personality. Something that, when focused in the wrong direction—like substances or sex—has taken me to dark, desperate places.

But it’s that same personality trait that’s also enabled me to do things I’m damn proud of. Like…

​My obsessive drive made all that possible.

It’s my gift and my curse.

Where it’s focused is what matters.

On something empowering or devastating. Beautiful or ugly. Meaningful or futile.

These pics of me were all taken ​within a few years of each other... 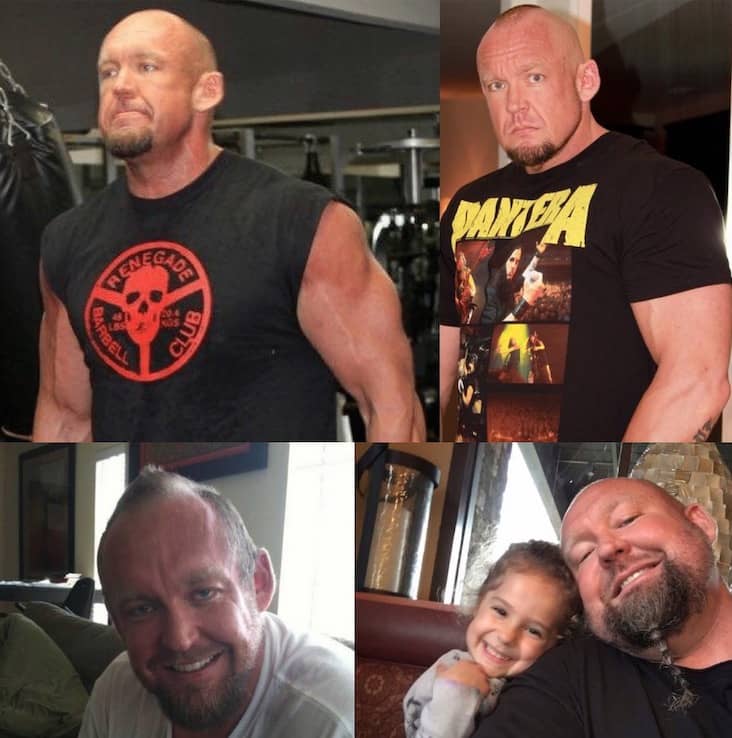 In the top two my focus was on lifting and nutrition.

Bottom left (where I look like I have no soul?)—pills. Lots and lotsa pills.

Bottom right—​well, writing, but also Veronica's good cooking. I topped 380 (have since lost 72 pounds with IF and OMAD). I'd simply replaced the pills with food.

​Where I point my obsessive drive is what matters.

This realization was incredibly liberating.

​That, sure, I have an obsessive personality. But it doesn't have to be a bad thing.

But I could do something great with it.

​This was huge for me.

Something else I found liberating was what I learned from social psychologist and author of Stumbling on Happiness, Daniel Gilbert.

Gilbert has spent a large part of his life researching what makes people happy and has given some fantastic TED talks on the subject. 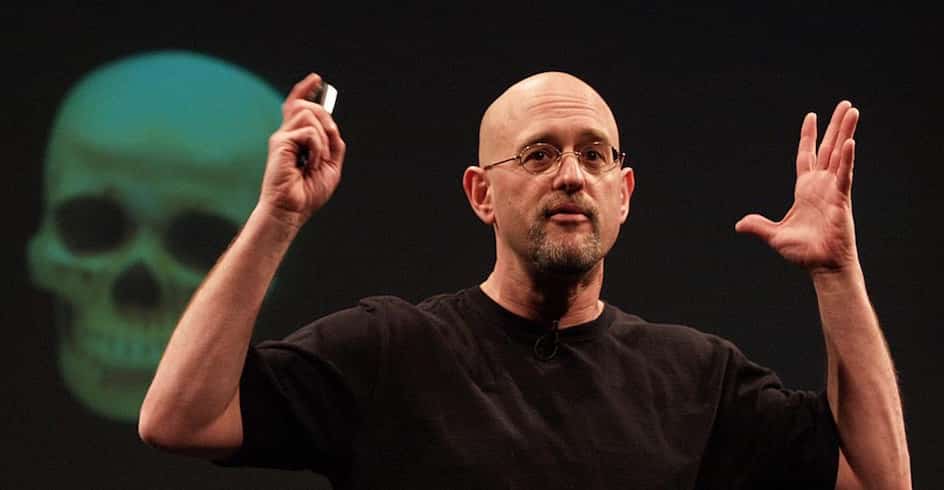 When I hear him, it feels like I’m listening to a truth I’ve known since before I was born but forgot.

Truth I need to be reminded of.

Now, one thing he often talks about is prospection—the ability to look into the future.

When we imagine the future, we tend to screw it up!

We overestimate how poorly we’ll fare in the face of adversity and see future events destroying us.

We’re also prone to believe events we view as positive will make us a lot happier than they actually do.

​In 1978, researchers from Northwestern University and the University of Massachusetts interviewed two very different groups of people—recent winners of the Illinois State Lottery... 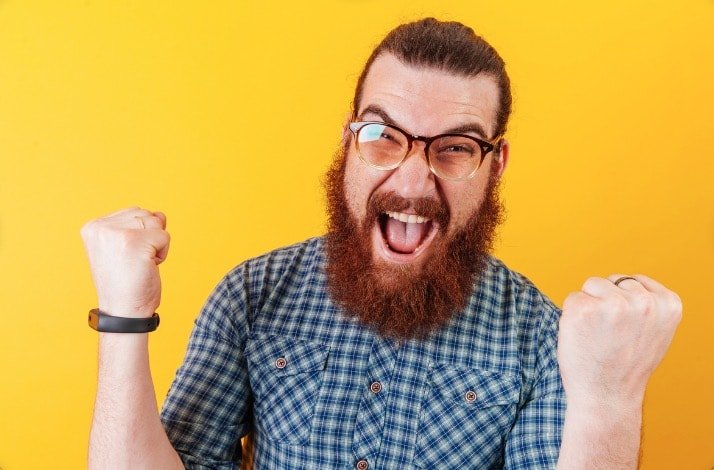 ​...​and recent victims of tragic accidents and were now either quadriplegic or paraplegic

Participants were asked to rate the level of pleasure they got from everyday activities like watching television, conversing with a friend, eating breakfasts, receiving a compliment or hearing a joke.

The results were surprising…

Most would assume the accident victims would be miserable and the lottery winners happy.

But that wasn’t the case.

The groups not only reported similar levels of happiness, but the accident victims actually reported being happier than the lottery winners.

The good isn’t as good as we believe it will be, and the bad isn’t as bad.

Yet even knowing this and having no doubt th​at the key to inner peace is acceptance of the present moment as it is, my default reaction to reality veering from where I want it to go is often resistance and worry.

Fortunately, I've gotten better and better at catching myself. But it's still a struggle.

Looking back, it’s clear that much of what I’ve fretted over and opposed in life turned out to be exactly what I needed.

Whether I ​had to learn a lesson or toughen up. Or life just ​had to clear the way for something new.

Doors close, windows open, and sometimes the roof is torn off by a tornado. 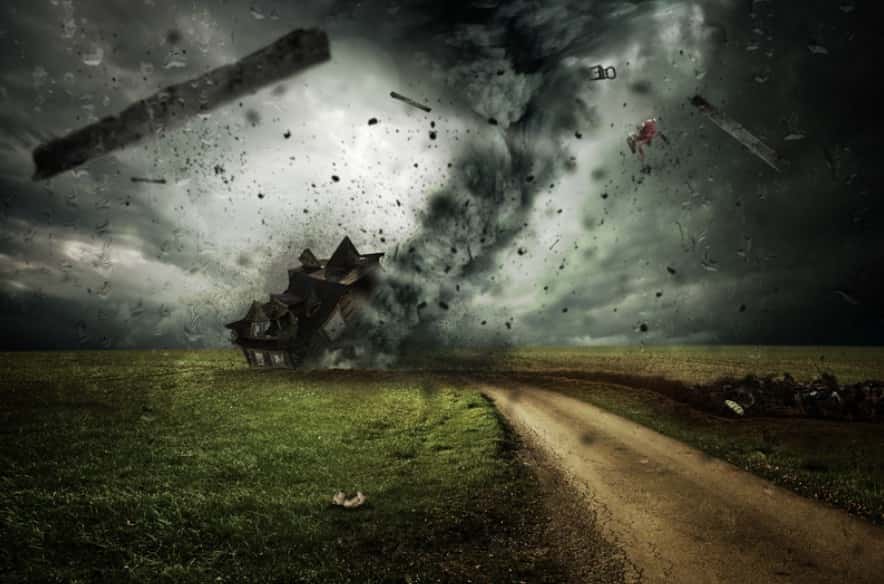 ​As Napoleon Hill said, “Every adversity, every failure, every heartache carries with it the seed of an equal or greater benefit.”

I’d love to hear your thoughts in the comment section.

If you got something from it, please click the like button, share it on social media, and maybe pass it along to someone you think it would benefit.

And if you’re a coach, expert, info-marketer, or run a business where YOU are the brand, DEFINITELY read what I just wrote RIGHT HERE. 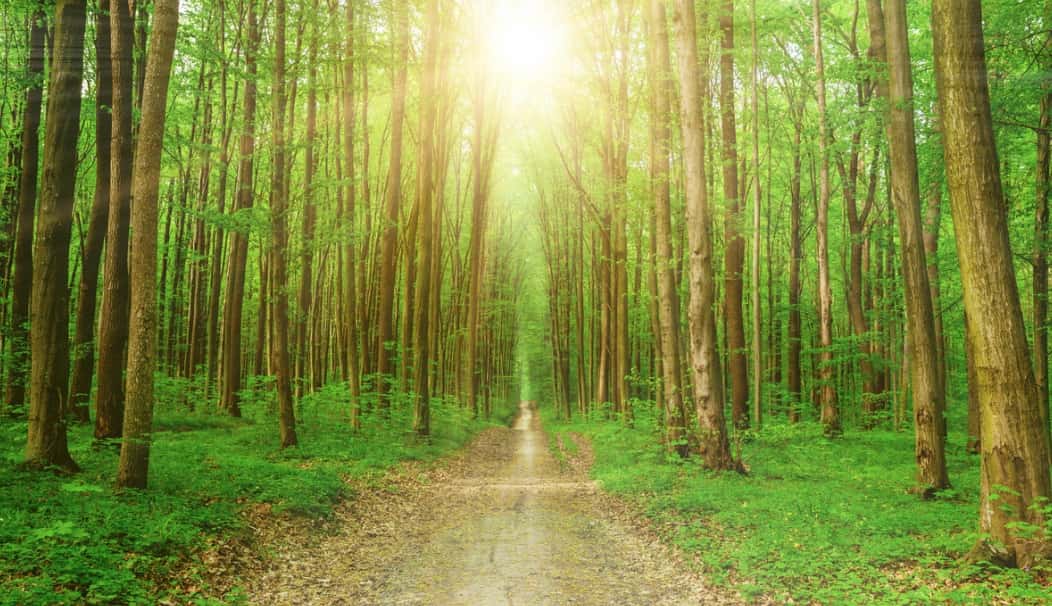 Boy, am I one lucky woman:)

Awesome post on when a door shuts another opens to even better life.

Pretty sure you have a monitor into my thoughts.

Thank you so much for releasing this as this has, yet again, given me hope in a bleak moment

Thank you, Adil. Your comments and messages always mean a lot to me