I've Been Running From This My Entire Life - Chris McCombs

I’ve Been Running From This My Entire Life 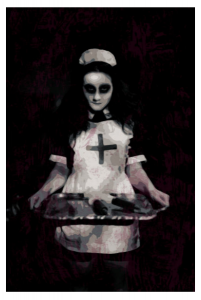 I had no place to run. I screamed, cried, and tried to hide under the table. The big nurse holding the syringe blocked the door, while my mom tried to apprehend my little seven-year old ass and subdue me long enough for the nurse to have her way with me.

The promise of getting a Mad Magazine after the visit wasn’t enough to coerce me into voluntarily surrendering to that godforsaken needle of fate. It took being overpowered and held down. Or at least that’s how I remember it.

However, the real hell didn’t begin until after the injection made it’s way out of my tiny, undeveloped medial deltoid muscle…

You see, at the front desk my mom scheduled another appointment. I had to come back in 30 days for a second stabbing.

As we walked out of the doctors office to go pick up my promised Mad Magazine, I thought about how I could run away. Possibly flee the country if I had to. Or maybe even do myself in. All to avoid the hell of another puncture wound being perpetrated on me by the evil medical professionals who seemed to be only interested in one thing—harming innocent and defenseless children like myself. 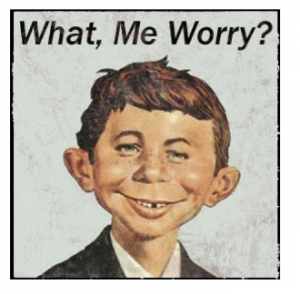 The next 30 days were spent dwelling on the impending doctor’s appointment that grew closer by the second. Whether I was eating breakfast, playing in the street with friends, or in my jammies watching Batman reruns, in both the back and front of mind I knew once again I had to face that wrathful nurse with her syringe full of pain.

Along with anxiously awaiting the arrival of Santa Claus each year, I believe this was my first concept of time—in terms of days, weeks, and months kinda time. As the appointment loomed over me it continued to suck me right out of my childhood—snatching me up from the moment and tossing me dead center into the chaotic and terrifying world inside my head—the place where that big needle always lay in wait just around the corner.

And just like that booster shot I had to get back in 1977, whenever the ominous event finally comes to pass, the prick may sting a bit, but never nearly as much as the stories I make up in my head about it, as time closes the gap between where I am and the arrival of whatever approaching event I want so little to do with. 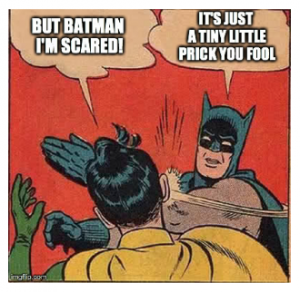 In fact, I have found the only “bad” part is allowing the mental stories of the impending doom to abduct me from the moment without questioning their true motives. I’ve spent a lot of my years running for cover from some imagined future, and then when the future finally catches up with me, the monster behind the mask always backs off as soon as I stop running and put my dukes up.

Even though I no longer fear needles, there is almost always some impending incident that makes me feel like that scared seven-year old boy. Often not realizing how it’s my choice to a let a tiny little three-second sting ruin an entire month of playing ball, riding bikes, eating Fruity Pebbles, and watching Batman in my underwear.

P.S. I’d love to hear your comments below

Chris,
So true! I always find the fear of an upcoming event, whether it be work or otherwise, is so much worse than the event itself. This is such a common issue for me, that I’m surprised there isn’t a term specifically for this very form of negative anticipation.
Keep on spreading the good word

Love it. So true.
Thanks.

Thanks for reminding me of my own fear of being harnessed by the system
(nurses had to hold me down after several failed attempts to find a vein while lying to me about what they were doing–I was 4 and at daycare). I have a golden opportunity to make a difference in the public school system and I am letting it chain me to their system of accountability.

So true as well ! I thought it was the doctor putting his finger in your butt!!!

This is sooooo true. I myself still deal with the imagined fear. Which is always worse than reality.
I try to remember that FEAR is False Evidence Appearing Real. I try to live in the NOW because the NOW is our only true reality and the only thing we truly have power over.

Loved it – and it’s great to see you write on the blog again! Try and keep it up, even if they’re short posts like this one :).

Wow . Perfect. I am starting a new job on Monday …and was planning on worrying the entire long Fourth of July weekend ….maybe I will try to take a moment to be thankful for something instead ….thank you

I love you Chris! True! I feel ya bro!

Perfect and awesome. Was much needed. All I got to do is try it out and just do it. Thank you so much for a simple, effective and beautiful piece of your writing. Love from INDIA. 🙂

Awesome, finally a post from you. So why are we such chickens? If “what doesn’t kill us makes us stronger ” and we always find a way; why let things bring down what we could be? I’m taking on a new attitude!

Spot on. Funny how no matter how many times this happens; the upcoming event, the scenarios of impending doom that play out in your mind, the actual event passing, often with little fanfare; that it’s still difficult to break this cycle of thinking. Good reminder to live in the now. Love your posts, keep them coming

So true…funny how we can waste so much mental energy and time worrying about some upcoming event, and when it happens it comes and goes quickly often without any negative consequences at all. In fact, we grow from the “uncomfortable” experiences, and they should be welcomed more than shunned.

Love this!!! All I do is waste time worrying about stupid crap like this and it ruins everything else. Thank you so much for this blog. I love all your writings they have all inspired me in some way or another. Keep up the great work!!

You’re right on target, Chris. The reality, of events we dread, is almost never as bad as the fears we build up. Very often the reality is harmless, only slightly negative or positive. I can think of many “bad” events in my life that turned into good. I can also think of times when the “bad” things didn’t happen and I later wished they had.

Balm for the soul, Chris.

Just finished packing up my memories from Mom’s house where I grew up and she lived for the last forty years – she’s in a nursing home from a stroke – and it was big, ugly, and horrible beforehand. But when it really happened, it was sweet, poignant – and now it’s done. I’m having a glass of wine and thinking that I kick a$$. Why did I waste so much emotional energy on the task, anyway?

you know i just recently felt that needleinthebutt sensation when my decision to leave my country to explore another part of the world was closing in. except that in the beginning i began with excitement and as time narrowed dread settled in accompanied with fear and anxiety. when the moment arrived, the needle was removed and ecstasy arrived. awesome.

Chris,
Interesting choice for your “return” post. I would have thought it would have had something to do with where you’ve been for the last 3 months and why you haven’t written anything here. I was expecting a story of how you got mixed up in a drug raid at an airport in Peru and spent a month in prison fending off AIDS infected crackheads or some shit like that..

I honestly love this, but tell me, how did you get over the Opioid withdrawals? I read your blogs often, so I have a feeling you’re going to tell me that you just wanted to stop so you stopped, but I’m not so sure it’s that easy. Also, I’m not assuming that’s what happened, that just seems like the kinda guy you are, which is pretty fuckin’ sweet. Either way, any advice?

Hey Christine, I’ve had to get over the opiod withdrawls many times in my life. I think going to hell in back is the only way to do it. I guess some people wing off with suboxone or rapid withdrawl procedure. But I’ve just gritted my teeth and dove in. It sucks. Hate it, hate it, hate it, and when I was on them I’d do anything to avoid coming off. It def aint easy. Last time I ended up going into a detox facility which helped.

Another great post. I can relate. I’ve been a personal trainer and gym owner in Austin,Texas fir a long time and I had these 2 ladoes from a dental office join up. They persuaded me to come to their shop for a checkup, etc after a couple of years of broken promises. I eventually went over and upon hearing the sound of that drill and smelling the novacain, I about jumped out of the chair. They thought it was amusing as I’m a decent sized guy (6’1 and 230) and I got a lot of ribbing for it. No apologies. I’ve been terrified of the dentist since I was 7 because of some crazy Romanian who was needle happy and had shaky hands. 38 years later, it’s the same for me. Logic, rationalization, etc be damned. I’m not getting over it. Fuck me.

OMG Chris. This has to be the most relevant post (for me) that you have made yet.

Thanks for hitting me square in the solar plexus with this one!